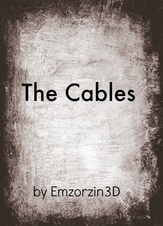 Jeremy’s hands tightened around the brown package in his lap as the screech of metal hurt his ears. The cart’s brakes locked around the cable, slowing it down so suddenly that a pair of standing passengers very nearly ended up on the floor.

Beyond the windows of the cart another line of cable was visible, travelling in the opposite direction. Jeremy slipped his pocket watch from the pouch on his belt and quickly estimated that the next cart to pass them wouldn’t be for at least another 7 minutes.

It was mundane thoughts that stopped Jeremy from thinking too long on other things. Such as how far away they were from the ground below. (The number was in fact lodged in his head but it’s terrifying size was enough to get it pushed in to a far distant corner, where he couldn’t think on it until after his journey.)

The sight of clouds, blue skies and orange swallows was pleasant sight and one Jeremy would attempt to enjoy if the cart’s driver had a better control on the brakes.

“What’s in there?” came a lightly pitched voice. It was a young boy maybe nine years old or so. He wore a bright blue blazer and swung his legs back and to beneath the bench. “Is it a present?” he scooted along to get a closer look.

Jeremy swung the package away and his lips threatened to curl upwards in distaste but seeing as the boy’s mother was most likely in the carriage with them, he reined it in.

“Didn’t your mother tell you it was rude to ask questions about secret things?”

The boy wiped his nose on his sleeve, leaving behind a trail that even a slug would be embarrassed by, then pointed to a woman in a green frock. It said a lot that she sat on the opposite side of the cart and a little further along. Though she was quite pretty, her features had been marred by sleep deprivation and stress. Jeremy suspected that he knew the cause.

“She reckons it’s good to be inquiseltive.”

“It’s inquisitive and judging from the look of her I highly doubt she appreciates being bothered so much.” This time Jeremy looked down and practically snarled at the kid. To his frustration the boy gave him a wide genuine grin.

“Have you been on one of the cable carts before?”

“Me and Mum have been on them loads. What about trains? You been on a train?”

“Do you prefer the carts though?”

“How far down from the ground do you reckon we are?” he turned to look out the window.

Jeremy’s mind threatened to give up the information. (three hundred and…) “Be quiet boy, you’re worrying the passengers!” Jeremy leaned in and did his best to look intimidating. For a moment he thought it had worked. The boy stared back in silence.

Of course it barely lasted a second and he replied in a quiet voice. “Who?”

“Me,” Jeremy growled under his breath.

The boy opened his mouth then thought better of it. He looked down and started to pat his knees to a rhythm that no musician would wish to replicate. Jeremy wondered if this was his poor attempt at becoming less annoying.

“It is a present.” Jeremy’s voice had calmed. The boy gazed back at him in wonder. “For a very special woman.”

“Is she pretty?” The boy’s question lacked the irritating tone that had accompanied the others. Maybe there was hope for him yet.

“Well I hope she likes it,” said the boy. “Only, I got a present for someone once and they didn’t like it and they left it at my house and I never saw ‘em again.”

“What did you get them? A frog from the garden?”

“A necklace.” Jeremy felt the tiniest pang of guilt. The boy continued. “I saved up my pocket money and mum helped with the rest. I found this really pretty stone on a string to go around your neck. It was this blue thing, a bit like my blazer.” He tugged at his blazer in the excitement of the story. “But she said it was rubbish. I haven’t seen her since.”

“Do you not see her at school?”

The boy screwed up his face in confusion and then quickly shook his head. “No, no, no. She’s not from school, she’s my sister. She’s older than me so she doesn’t live at home anymore. I asked her to stay but she said she didn’t want to.”

Jeremy found himself at a loss for words. He let his head lean back, his hair providing a cushion between him and the glass. “Mine isn’t for a girl from school either.”

The boy giggled at that because Jeremy was far too old to be chasing school-girls. Although Jeremy had heard stories of men that did and they always seemed to end up with one less thing dangling between their legs. Jeremy was about to recall one but stopped when he decided it wasn’t exactly “age appropriate”.

“Someone I haven’t seen in a very long time. So don’t you worry boy. It might feel like they’re leaving our lives forever but it’s not always the case.”

“Are you happy to see them then?”

Jeremy didn’t answer. Jeremy didn’t answer because he didn’t know. It wasn’t just their distance from the ground he had been worrying over for the length of the journey, it had been what awaited him at the end of it. If the cable snapped in that very moment, he would at least have the luxury of certainty.

But when this journey ended, what would await him? Would she even be there?

There was another shriek of metal and every passenger lurched sideways. Jeremy was just debating whether to complain to the driver when he spotted the station. They were pulling in.

“Good luck!” called the boy as he ran back to his mother. She smiled at him as he neared and pulled him close to keep him safe. She kissed him on the head, glad to have him back, annoying questions and all.

The cart darkened as they went under the shelter of the tin roof. Outside, men shouted and laughed with each other as they lined up the cart to the platform and disconnected it from the moving cable.

The doors opened and the driver called back, “All off, final station, all off.” Which put Jeremy right back in to his bad mood because this particular line only went between two stations so of course it was the final station.

Jeremy remained seated while every other passenger hurried to get off. As the last few neared the door, he knew he had to stand up or risk looking like a strange man who can’t work out how to get off a cable cart.

With a deep sigh he tucked the brown package under his arm and strode off the cart and in to the open. Off to one side stood a woman in white. She had seen him first and her face beamed with pride.

Jeremy handed the package to her with one hand and said “Happy Birthday Mother.”
Powered by